Love the bright colors at the markets!

One warm March morning, I set up my art display at a new market in Sayulita. It was the first day of its existence, and no one knew what to expect. I was already selling at four other markets, but this one was literally steps from our door. I wasn’t sure where to set up, so I ended up on the very edge of the market. I was the only non-Mexican selling there, and I didn’t want to step on anyone’s toes. It turned out to be a painfully slow morning. No one in town knew about this new market, so very few people came by to shop.

While I waited patiently to see if anyone would come by, I noticed two Mexican women approach my stand. I recognized them from the market—they were vendors, too, and were set up near me. They must be looking for a way to pass the time, I thought. They stood in front of my display and stared. “Muy bonito. Muy bonito!” One of them picked up a small, square picture that I’d taken of a statue of Christ in a cemetery. It was an image that resonated with tourists and Mexicans alike, but I hadn’t sold a single one since I’d started selling my art two months earlier.

The image that capitaved their hearts.

She looked at it lovingly and again said, “Muy bonito.” She may have asked, “Cuanto cuesta?” I don’t remember. In that moment, I instantly decided to do some giving. “Regalo,” I said. Remembering that I had the same piece in a larger size, I pulled it out from the back of my display to show her. I waited to see what she thought of this larger piece and judging by the look on her face, she loved it. “Regalo.” She looked at me in disbelief. “Si, regalo,” I said. I pulled out a similar picture for the other woman. “Regalo.” They stared at their pictures, looking back at me with the most loving eyes. “I will put this above my bed for protection,” one said. They cradled the pictures in their arms like newborn babies saying, “Muchas gracias,” over and over again as they walked away. A third woman, having seen what had just gone down, approached. I offered her the small, square picture, and she happily walked away with it.

Later that day, one of the original women returned and handed me something wrapped in paper. She said only, “Regalo,” and walked away. It was a brightly hand-painted sun made out of a coconut. I loved it. That day, I sold only three tiny pictures to a tourist family and made maybe $18, but I packed up my things with a full heart and a big smile on my face. 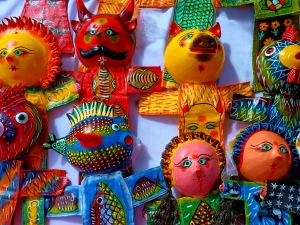 This is similar to what I was gifted.

Later that week, I was selling at my favorite market, the Mercado del Pueblo in Sayulita. I wandered over to look at my neighbor Memo’s jewelry. We’d become buddies, and I loved how he was always smiling and content. I tried on a ring with a symbol of the circle of life, and it fit perfectly. Admiring it on my finger, I asked, “Cuanto cuesta?”

“For you, regalo,” he replied.

I looked at him and hesitated for a second, really wanting to give him something for his work.

“Regalo,” he said again. “Some things matter more than money.”

What could I say? I knew exactly what he meant. I knew he needed to give it to me, so I let him. I pulled my hand up to my heart and thanked him.

Over the next few weeks, I watched the circle of positivity and giving go round and round. Someone would give to me or some amazing thing would happen, and then I’d feel fueled to give back to someone, anyone! At one point, I offered a discount to two different people because they bought more than one piece. This was a standard thing for me to do. BOTH people paid me the full price instead.

The flow of giving and receiving was humbling and exhilarating and amazing. I’d never witnessed or been a part of such instant karma (or whatever you want to call it) as I was during those last weeks in Sayulita. I think I’m addicted. 😉